As Drew struggled to support herself, she realized the best thing to do was to emancipate from her parents so that she could be considered a legal adult. The emancipation was granted to her right before her 15th birthday. She continued auditioning while working miscellaneous jobs but in her own words, she was “blacklisted beyond belief”. Casting directors scoffed at her, but that didn’t deter Drew. She was determined to make a comeback. After a few small parts in forgettable films, she finally landed the title role in Poison Ivy. Drew correctly intuited that the movie would help her make the leap from child star to adult actress, due to its mature themes. It also made her a sex symbol and suddenly she was appearing in racy photo shoots for magazines like Interview and Us.

Drew next heavily campaigned for the lead role in Guncrazy. Director Tamra Davis was at first hesitant to cast Drew, but was immediately won over by her after they met. Drew received rave reviews for her performance, as well as her second Golden Globe nomination. Her agent J.J. Harris introduced Drew to one of her other clients, singer and actor Jamie Walters and the two of them fell in love. Although she’d had previous boyfriends (including Corey Feldman and Leland Hayward), this was by far her most serious relationship. Meanwhile, Drew continued to get acting roles. She filmed the sci-fi/horror movie Doppelganger and made a brief foray into television as a regular on the short-lived Aaron Spelling show 2000 Malibu Road. Jamie proposed to Drew when she was 17 and she happily accepted. The wedding never came to be though, and Jamie broke up with Drew while she was in Vancouver filming yet another naughty girl role in The Amy Fisher Story. Drew was completely brokenhearted. She also fell out with her mother around this time and the two of them became estranged.

She found some solace when she was asked to be the new face of Guess. The campaign was a huge success and showcased Drew striking sexy poses in magazines and on billboards worldwide. She then signed on to her friend Tamra Davis’s next project, an all female western called Bad Girls. The production was plagued by endless amounts of trouble, including Tamra being let go as director. Throughout all the chaos, Drew paid close attention to the way producer Lynda Obst handled everything. She was inspired and the first seeds of Flower Films were planted.

Drew shocked the world once again when she married Welsh bar owner Jeremy Thomas in March 1994 at the age of 19. She had only been dating him briefly and the wedding was a completely spur of the moment decision. It would be one of her only regrets in life and later it was revealed that the main purpose of the marriage had been to get Jeremy a green card. She left immediately after the wedding to begin filming on Boys on the Side and divorce papers were filed by Drew after 29 days of marriage.

Around this time, Drew met Hole guitarist Eric Erlandson when she threw up on his shoes outside of a club as a result of food poisoning. Shortly after, she went to Seattle to begin filming Mad Love and their paths crossed yet again. The two of them soon fell in love and became an item. Also in Seattle, Drew met Nancy Juvonen, the sister of one of the movie’s production assistants. Upon returning to Los Angeles, Drew called Nancy and dared her to relocate to start a production company together, along with Drew’s former assistant Kim Greitzer. Flower Films was born, and the business partners spent their time learning everything they could about the industry. The company started small with the laundry room in Drew’s house acting as their first office. Although the early projects they developed (All She Wanted and Like a Lady to name a few) never came to fruition, they were gaining the experience that would prove valuable in the future.

On a personal level, Drew was happier than ever before. Her relationship with Eric flourished and she had finally made peace with her father. With a newfound comfort in her skin and a feeling of freedom, she posed nude for Playboy magazine. She followed that up with a striptease at a New York club and playful desktop dance for longtime crush David Letterman’s birthday that culminated in flashing him. She had a small part in 1995’s summer blockbuster Batman Forever, which was released a few weeks after Mad Love, and modeled for Miu Miu in international print ads. Suddenly Drew was very much in demand, which led to the “biggest gift” she’d ever been given: Woody Allen cast her against type as a good girl in his ensemble film Everyone Says I Love You. She finished out the year in New York filming that and Wishful Thinking. Drew had done so much living and made so many accomplishments, all before even celebrating her 21st birthday! 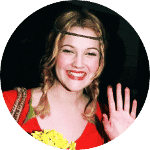